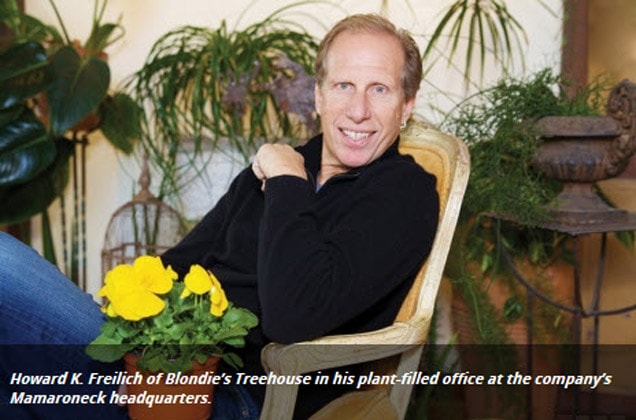 This spring Blondie’s president, Howard K. Freilich, is featured in WAG, Westchester’s leading lifestyle magazine. Following Howard through his professional career, the readers gain unique insight to Blondie’s conception and lifetime that spans over thirty-five years. Written by Mary Shustack Howard K. Freilich started his horticultural business out of the back of a humble camper in late-1970s Westchester. Today, he stands as the president of Blondie’s Treehouse Inc., a multimillion-dollar enterprise that’s one of the 10 largest interior horticultural companies in the country. But don’t expect Freilich to be a humorless executive complete with a designer suit and slick surroundings. No, it’s a laid-back and welcoming man – a study in casual style with jeans, zippered pullover and earring – who welcomes a pair of visitors to the company’s Mamaroneck headquarters on a recent morning. Freilich’s light-filled office, nestled within a 19th-century former factory, is vibrant with an eclectic mix of art and books, antiques and vintage finds, rock music and plants – lots and lots of plants. “Sometimes they say the shoemaker has no shoes. I have lots of plants,” he says with a ready smile. “It was always a hobby,” Freilich adds. “I was really fortunate. I have a green thumb.” But Freilich, a Queens native, actually began his studies to become a veterinarian before he would turn his attention to horticulture. “I started out really as an animal husbandry major, to be a vet, but I have allergies and it made it really uncomfortable,” Freilich says. “Being young and stupid, I continued that for two years in college.” At some point, he says, “I finally said, ‘It’s not for me.’” That wake-up call put Freilich on a path that would lead to the success that is Blondie’s Treehouse, which he has nurtured to its 35th anniversary this year. Its name, he shares, has quite a clear-cut origin. “My nickname’s always been Blondie. We put trees in houses. It’s what I do.” That is, of course, in simplest terms. With a staff of more than 100, four locations and sales in excess of $10 million, Blondie’s Treehouse is an industry powerhouse. The company has won more than 30 awards for its work throughout the tristate area and has been listed as one of Inc. Magazine’s fastest-growing companies. The company has built its reputation on dealing directly with businesses and designers. “We are not a nursery,” Freilich says. “We’re not geared to that.” In addition to the Mamaroneck facility, the company has a floral studio in Manhattan with a showroom Freilich says is in the “heart of the plant and flower district.” The New York-based staff is ideally poised for its work with top clients. “We do The Plaza, Omni and The Ritz and The Mandarin and The Waldorf and The Pierre …” he says. That work includes stylish interior and exterior plantings and floral arrangements, as well as special-event services. But the business of Blondie’s extends far beyond New York. “We do work all over the country now,” Freilich says. And it’s quite a leap from his earliest days. Link to the complete article here.