Homes and offices trap all kinds of chemicals inside. National Indoor Plant Week is a week-long celebration of the perfect indoor air cleaner. Annually celebrated the third week in September, National Indoor Plant Week was established to promote and increase public awareness of the importance of live plants in interior spaces. The goal is to be a nation-wide effort to increase awareness of the value of plants and the enthusiasm and excitement for this annual event is tremendous !

When the World Trade Center fell on September 11, 2001, one tree, a Callery Pear (Pyrus calleryana), survived through the wreckage and was given the name “The Survivor Tree.” The Survivor Tree seedling program was launched on September 11, 2013, in partnership with Bartlett Tree Experts of Stamford, Connecticut, and John Bowne High School in the Flushing neighborhood of Queens. Over 400 saplings have been grown from that one surviving pear tree and the program sees to it that each year in September; young trees are given to communities affected by tragedy, in the spirit of hope and resilience. 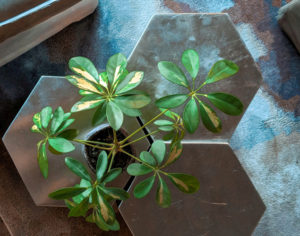 The concept of Biophilic design is that our built environment is critical to people’s health, and productivity, as well as their emotional, intellectual, and spiritual well-being. Buildings and landscape can support human health or they can be detrimental. Biophilia shifts the emphasis of our development and asks how we can make our built environments better for human health and safer for the environment.

» Read more about: Biophilia: The love of nature and of living things  »

» Read more about: Divide and Conquer- How a clever design unlocked a rooftop’s potential  »

These verdant moss frames are the newest additions to Blondie’s line of signature décor. Our designers use a collection of high quality mosses, including reindeer, clump and mood moss, in a variety of shades and textures. Combined with sandblasted wooden branches and carefully selected botanical elements, our moss frames effortlessly bring nature indoors. Ask us how we can customize any piece to be in harmony with your space.